While Citibank praised ’s potential, analysts at Bank of America published a damning indictment of the biggest cryptocurrency. They do, however, see much more promise in DeFi.

Several central banks are actively working on CBDC, with countries such as China and the UAE even preparing inter-operability between their national digital currencies. Bank of America described the move as “defending their territory from cryptocurrencies,” suggesting that CBDCs would quickly replace private cryptocurrencies whose use could be restricted.

After heavy restrictions, BoA adds that citizens will turn to CBDCs as they provide users with governmental backing and a far less volatile asset.

2. Bitcoin Is Still Too Volatile

According to Bank of America, Bitcoin should have already reached maturity as an asset. As witnessed during last March’s COVID crash, the massive swings in value suggest that Bitcoin can’t be a store of value.

The firm writes that Bitcoin’s volatility is higher than forex, , or and shows no sign of slowing down as 2021 is the second most volatile year to date.

3. Bitcoin Is an Environmental Disaster

The price of Bitcoin is directly correlated to its energy consumption, BoA analysts argue. “Should prices rise to $1mn, Bitcoin may turn into the world’s 5th largest emitter, surpassing Japan.”

This is a very debatable claim as the truth about the environmental impact of Bitcoin is much more complex and not as directly correlated to price.

BoA reports that 2.4% of addresses hold 95% of the Bitcoin supply while the rest are mostly empty, comparing this to the top 1 percent of Americans who hold 30% of all household wealth.

This number fails to consider that a majority of investors do not hold their own Bitcoin but often trust exchanges to do so.

The issue of calculating Bitcoin concentration through this metric is that one address isn’t necessarily one person. In the 2.4% number, these addresses can hold the funds of thousands of customers. This can work both ways as, similarly, there is no limitation of the accounts that one person can open. An active trader might use several addresses and leave some empty, for instance.

On-chain analytics firm Glassnode estimates the amount of Bitcoin held by each category of Bitcoin holders as the following (the numbers on the left represent BTC holdings): 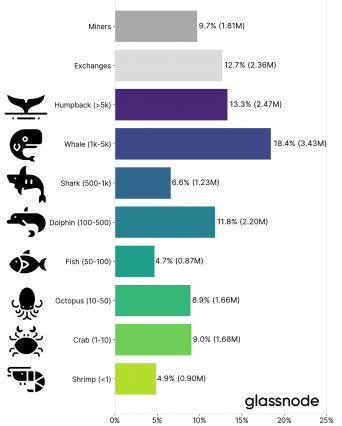 BoA compares Bitcoin’s total output of roughly 300,000 transactions per day to Visa’s (NYSE:) stated 236 million transactions per hour. As trading is supported by mining to ensure the settlement process, the Bitcoin network’s speed will always be capped, limiting its potential to scale.

This fails to take into account the effort to develop Bitcoin’s second layer through projects like Lightning Network, which effectively allows infinite transactions per second, limited only by the speed and capacity of nodes.

In Citibank’s report, their analysts argued that comparing Bitcoin and Visa transactions was akin to comparing international trade transfers and buying cups of coffee. The two networks are used for very different purposes, and the value proposition of a decentralized blockchain network was not the same as a credit card company, nor does it pretend to be.

Bank of America Bullish on DeFi

Despite the scathing analysis of Bitcoin, the bank suggested that DeFi could “potentially be more disruptive than Bitcoin.”

According to their analysts, while the DeFi space still has a long way to go, it could challenge centralized financial institutions in the long term. They still highlight the issue of scalability on the blockchain, something that developers are working hard on for the release of Ethereum 2.0.

Binance is currently facing money laundering and tax evasion investigations by the US Justice Department and the Internal Revenue...

The Index is reconstituted annually and added 11 new companies in March WEST HOLLYWOOD, Calif., May 14, 2021 (GLOBE...