Former U.S. Rep. Beto O’Rourke said Friday that he is not planning to challenge Greg Abbott for Texas governor.

“I’ve got no plans to run, and I’m very focused on the things that I’m lucky enough to do right now — organizing, registering voters and teaching,” the El Paso Democrat for an upcoming segment on Lone Star Politics on KXAS-TV (Channel 5). “I’m just going to keep doing what I’m doing now.”

Many Democrats are counting on O’Rourke, who in 2018 lost to Republican Sen. Ted Cruz by 2.6 percentage points, to be the party’s standard bearer against Abbott in 2022. After consulting some elected Democrats, O’Rourke had said he was considering running for governor, but added he would work to elect any Democrat that emerged against Abbott.

But hours later, after a story about O’Rourke’s comments was published, the Democrat told The Dallas Morning News that he had not ruled out a run against Abbott.

“What I said today is what I’ve been saying for months: I’m not currently considering a run for office,” O’Rourke said in a prepared statement. “I’m focused on what I’m doing now (teaching and organizing). Nothing’s changed and nothing I said would preclude me from considering a run in the future.”

The filing deadline for the Texas 2022 election is in December. But because of redistricting, that date could change.

On Lone Star Politics, O’Rourke says he’s content with his work in mobilizing voters through his PAC called Powered by People. And he teaches classes at the University of Texas and Texas State University. 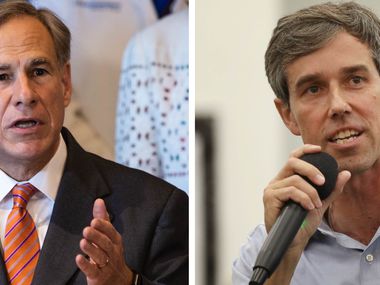 The former presidential candidate has also been trying to stop bills in the Republican-controlled Legislature that he says are designed to suppress voting.

“I drove out to the Capitol, eight and a half hour drive, waited 15 hours to be able to testify,” O’Rourke said, adding that he enjoys working with Texas civil rights groups. “That’s the work that is most important right now and I don’t want to distract from it by talking about a campaign or running for office. I want to do what’s before us … this work to protect our democracy.”

If O’Rourke remains out of the race for governor, Democrats will have to field a candidate against a well-known, two-term incumbent with a stout political organization and the ability to raise tens of millions of dollars.

That’s why Democrats have been pressing O’Rourke, who raised $80 million in his contest against Cruz, to be their champion against Abbott.

Can any Democrat beat Abbott?

“How about a Democrat like Clay Jenkins, the county judge of Dallas County, who has, in contrast, absolutely distinguished himself in the professionalism with which he’s met both the pandemic and the rollout of the vaccine?” O’Rourke asked. “How about somebody like Lina Hidalgo, the county judge in Harris County, who has disregarded the polls and the conventional wisdom and instead followed the best public health advice and science and guidance from medical practitioners?”

Jenkins, who has clashed with Abbott over pandemic issues, said he is focusing on defeating COVID-19 and getting Dallas County through the coronavirus crisis.

But there have been rumblings in Democratic Party circles about a movement to draft Jenkins.

Hidalgo is considered a rising star on the Texas political scene. A statewide or high profile race is likely in her future, but running against Abbott in 2022 may be too soon.

O’Rourke suggested that his absence…

A bill rushed through the Colorado legislature in the closing days of the session will increase automobile insurance rates...

The march from unofficial holiday to a formal day off for most federal employees started in Texas, more than...

By LOLITA C. BALDOR, Associated PressWASHINGTON (AP) — Sen. Kirsten Gillibrand is on the brink of success in her...

Virgin Pulse Expands Homebase for Health with Acquisition of Predictive