Growth in dollar credit outside the US remained robust

For each of the three major currencies (USD, EUR, JPY), the growth in credit to non-residents – ie non-bank borrowers residing outside the currency-issuing country – slowed in Q3 2020 (Graph 1). US dollar credit to these borrowers weathered the period of market tensions earlier in 2020, and expanded by 5% year on year (yoy) in the third quarter to reach $12.7 trillion, down from 6% in the previous quarter (red line). Euro and yen credit (blue and yellow lines) lost more momentum, growing at 1.3% and 1.6% respectively, down from 3.8% and 2.6% yoy in the previous quarter. On a quarterly basis, US dollar credit increased by $45 billion (+0.4%) while euro and yen credit dropped by €14 billion (–0.4%) and ¥1.4 trillion (–2.7%) respectively. 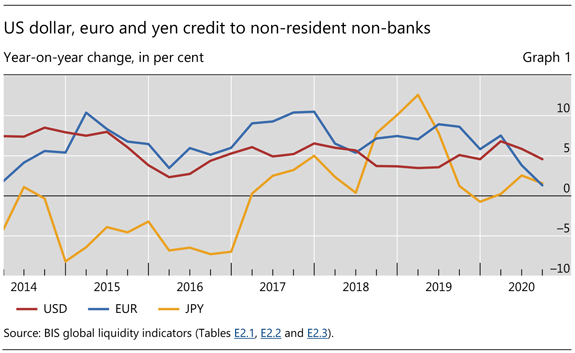 For all three major currencies, credit to non-resident borrowers has grown more slowly than credit to residents since the start of the Covid-19 pandemic in 2020 (Graph 2). For credit denominated in US dollars and in euros, this marked a break from developments over the past decade when credit to non-residents tended to grow faster. The surge in credit to residents in recent quarters was fuelled by increased government borrowing, reflecting efforts to mitigate the adverse effects of the pandemic. In Q3 2020, dollar credit to the US government grew by 19% yoy, while euro credit to euro area governments increased by 11%, comparable to levels seen following the Great Financial Crisis (GFC) of 2007–09 (Graph 2, dashed lines). (See also the latest BIS international banking Statistical Release, which showed that greater claims on the official sector – which includes both governments and central banks – have driven the expansion in banks’ balance sheets since the start of the pandemic.) 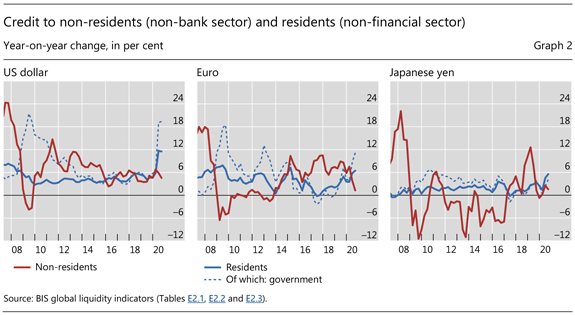 Share of debt securities in dollar credit continued to rise

Another broad trend, evident since the GFC, has been the shift from bank lending to bond markets in dollar credit to non-banks (Graph 3). Between Q4 2018 and Q3 2019, dollar debt issuance grew at the same pace as bank lending (Annex Graph A1). However, it has since accelerated, expanding in 2020 at a rate last seen in 2017. By Q3 2020, dollar-denominated debt securities were growing at 10% yoy, while bank lending contracted for the first time since Q2 2010 (–1% yoy; Annex Graph A1). As a result, the share of debt securities in total dollar credit to non-banks outside the United States rose to an all-time high of 53% (Graph 3, left-hand panel, solid line). For euro-denominated credit, this share has remained stable, above 50% over the past decade (centre panel, solid line). By contrast, for yen-denominated credit, it has been falling since 2012 (right-hand panel, solid line), especially for advanced economy borrowers. The share of debt securities in total dollar credit to EMDEs (left-hand panel, dashed line) has been rising rapidly in recent years. 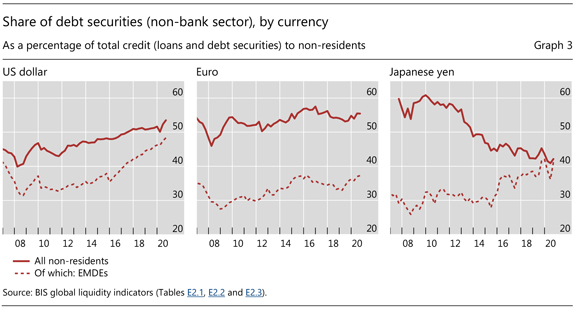 Dollar credit to borrowers in EMDEs slowed in the third quarter, but still grew by 6% yoy. It ended the quarter just shy of the $4 trillion peak in the previous quarter (Graph 4, left-hand panel, shaded area). Consistent with the past few quarters, the strong growth in credit to Africa and the Middle East, at 12% yoy, mainly reflected borrowing in the Middle East. Emerging Asia-Pacific also received new dollar credit (+7%), while Latin America and the Caribbean saw modest growth (+3%). By contrast,…

Suspend AstraZeneca use for people under 55, vaccine committee recommends

Trey Lance or Justin Fields? Or should the Falcons trade the No. 4 pick? Mailbag