Banks’ cross-border claims registered a modest contraction of $93 billion in the course of Q3 2020 on an FX- and break-adjusted basis (Graph 1, left-hand panel). This quarterly contraction was quite muted (0.3% of previous quarter stock) compared with the large fluctuations in Q1 and Q2 2020, of +$2.7 trillion and –$1.2 trillion, respectively. Year-on-year growth rates continued to fall from their recent Q1 2020 peak, when cross-border positions had surged (centre panel).

Claims on both advanced economies (AEs, –$131bn) and emerging market and developing economies (EMDEs, –$13bn) declined. As earlier in the year, these movements were in part driven by intragroup positions (Graph 1, right-hand panel). The decline in claims on AEs centred on related offices (–$114bn), especially on those in the United States (–$81bn). The unwinding of central bank dollar swap lines, which had swelled intragroup positions in Q1, contributed to this decline.1  By contrast, claims on offshore centres expanded by $41bn (left-hand panel), especially vis-à-vis Hong Kong SAR (+$39bn) and the Cayman Islands (+$24bn). More than half of the increase on Hong Kong was in the form of intragroup claims.

Some of the larger movements vis-à-vis AEs involved non-bank financial institutions (NBFIs). Claims on the United Kingdom (–$50bn), the Netherlands (–$50bn), Luxembourg (–$46bn), France (–$40bn) and Italy (–$39bn) all fell, mostly vis-à-vis NBFIs. These declines were partly offset by increases in claims on Japan (+97bn) and Germany (+65bn), notably on their resident banks and NBFIs.

The modest aggregate decline also conceals large differences on the creditor side. Banks located in China, France and the United Kingdom saw the greatest increases in cross-border claims while those in Spain , Germany and the United States reported outsize declines. 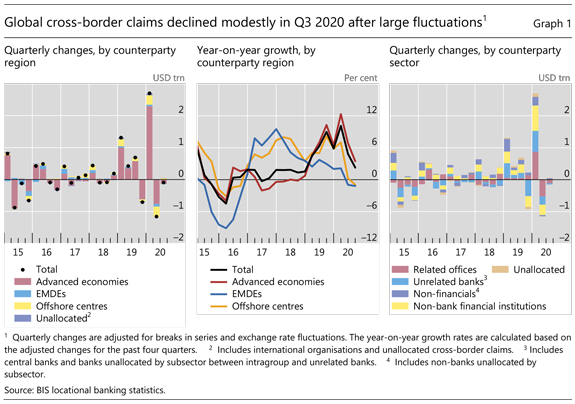 Cross-border claims on EMDEs contracted for the second consecutive quarter in Q3 2020, by $13 billion, and their year-on-year growth remained negative (Graph 2, left-hand panel).2  Although smaller than in Q2, the quarterly decline was again driven by claims on borrowers in Latin America (–$17bn, centre panel). More than three-quarters of the drop was on the major economies in the region, ie Brazil, Mexico, Chile, Colombia and Argentina. Claims on non-financial corporations in these countries fell the most.

During the pandemic, creditor banks located in AEs and offshore centres have reported a large contraction in their cross-border claims on EMDEs, while creditor banks within EMDEs reported a modest expansion. As a result, global cross-border claims on EMDEs declined by a combined $95 billion during the second and third quarters of 2020. Major AE and offshore creditors to EMDEs, such as banks located in the United States, the United Kingdom, Hong Kong SAR, Singapore and Japan, reduced their lending by a combined $97 billion during this period (Graph 2, right-hand panel). By contrast, banks in EMDEs booked a $26 billion increase in cross-border claims on EMDEs during the past two quarters. Banks in emerging Asia-Pacific, mainly China and Chinese Taipei, led the expansion. 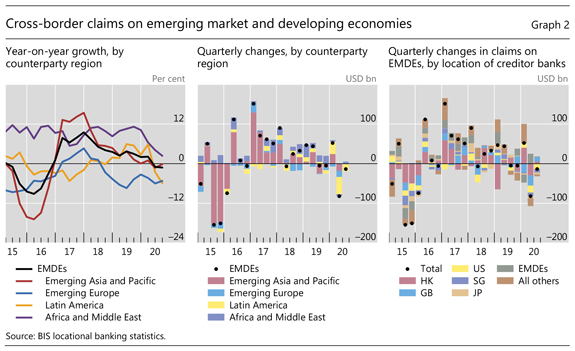 The fluctuations in cross-border positions provide but a partial picture of how internationally active banks’ balance sheets have evolved during the Covid-19 pandemic. A more comprehensive view based on the BIS consolidated banking statistics (CBS), which track the globally consolidated positions of banks headquartered in a given country (net of inter-office positions), shows that their total assets and liabilities have actually surged since the same period last year (Graph 3, left-hand panel). The total assets of banks headquartered in 22 BIS reporting countries grew from $67…

Joe Walsh speaks with FlipBlue on “political homelessness,” crossing the

Financial market infrastructures (FMIs) include the payment systems that we use every day, as well as more specialised systems...

About the BIS Innovation Hub

BOE Upbeat about Inflation Outlook. Negative Rate Seems Unlikely although It is