In this article we will discuss Cathie Wood’s latest stock picks and analyze her latest YouTube talk. To skip our discussion, go directly to Cathie Wood’s Top 5 Stocks Picks from her Q4 Portfolio.

Cathie Wood’s ARK is going through massive turbulence as investors flee high-growth stocks following rising yields and worries about inflation. ARK’s 5 ETFs have fallen 23% since early February through March 8, while ARK’s famous Innovation ETF crashed 31% through March 8 from its mid-February highs.  The 65-year-old investor who is known for her prescient and profitable bets on disruptive industries like electric vehicles, DNA sequencing, biotechnology, genetic editing and new battery technologies, posted a blowout year in 2020, with her Innovation Fund up 152%.  Investors flocked to invest billions into ARK’s ETF, pushing the firm’s assets to as much as $60 billion.

Cathie Wood’s bets are mostly based on a core assumption that the human society will continue to embrace advanced technologies that solve key problems in healthcare, automobiles, lifestyle and financial transactions. Despite the current turbulence and the resurgence of cyclical stocks, Ms. Wood’s thesis holds, especially for the companies that are working on truly disruptive technologies that could change the course of history. Some of these companies include Tesla,  Teladoc Health, Crispr Therapeutics, Zoom Video Communications, Ke Holdings Inc., among others.

Cathie Wood has become a celebrated figure on Reddit, where thousands of enthusiasts call her “Mama Cathie” or “Queen” of investing. Ms. Wood regularly posts videos on her YouTube channel, which has over 380,000 subscribers as of March 19.

In a March 6 segment on her YouTube channel, Ms. Wood talked about several important topics. We will mention some of the important points from her talk below by transcribing her video and adding some important quotes.

“We do believe we are on the right side of change, and disruptive innovation, transformative innovation, is going to deliver exponential growth trajectories for many of our companies. Most of them, the growth rates are enormous, and I think, some people find them unbelievable,” said Wood. 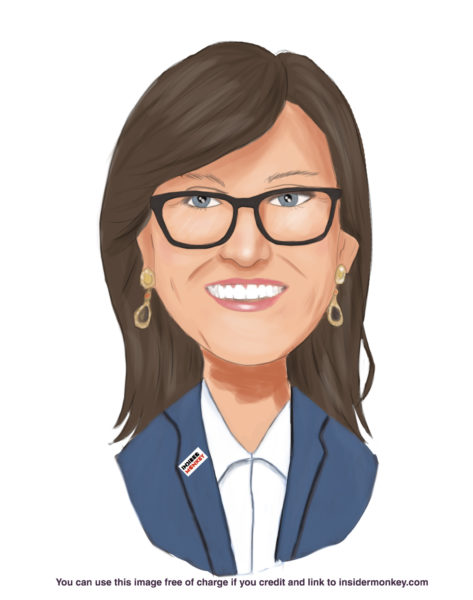 “We expect unit sales of electric vehicles globally, including China, to compound at an 82% annualized rate during the next five years. Most people, when they see a number like that, they’ll just say I don’t believe it. It’s not possible, and the reason we that skepticism often is because of where the automobile industry is right now. It is very mature. It’s not growing. We believe it has peaked, and that means all cars are in secular decline. If we are right that we are moving into more of a ride-sharing, both human-driven and autonomous, during the years ahead. This idea that electric vehicle sales could grow at an 82% annual rate, they’re just not going to believe it. That skepticism festers, especially, I would say, among institutional investors, whose analysts on the auto sector are mostly value analysts… You know, there are trends evolving here that are really fostering a lot of skepticism, especially the growth rates and the sustainability of the growth rates. But our research gives us an extreme sense of confidence that we are on the right track and that the truth will win out.”

“I think there’s a big difference between the way institutional investors look at investing and retail investors. We know that the Tesla example is a good one to illustrate the differences, and I know there was a lot of frustration, and it seems to have been pent up over many years. About Tesla, our research on it, lots of fear, uncertainty, and doubt with which we had to contend, but we thought it was a good thing. A lot of institutions are not set up to analyze a stock like Tesla. I’m not saying all institutions, but I’m saying most institutions. The reason for that is, after the tech and telecom bust 20 years ago, and on top of that, the ’08-’09 meltdown in the equity markets and the bond markets. There developed a lot of risk aversion, and volatility became a bad word. We have a volatile strategy, and we use that volatility to our benefit. Volatility is…

The year in review: capital markets in Japan

Redwire Space going public via a SPAC after year of acquisitions

What Kind Of Shareholders Own Gem Diamonds Limited (LON:GEMD)?

Will Grayscale Plan To Convert GBTC To A Bitcoin ETF Work?