While the Dow Jones Industrial Average (DJINDICES:^DJI) lagged the other major U.S. stock indexes on Wednesday, Thursday was a different story. The Dow was up about 0.65% at 12:20 p.m. EDT, following a few economic and pandemic-related developments.

Helping drive the Dow higher were Microsoft (NASDAQ:MSFT) and Walmart (NYSE:WMT). The two companies have teamed up to bid on the U.S. operations of social media sensation TikTok, and a deal is expected to happen in the next few days. 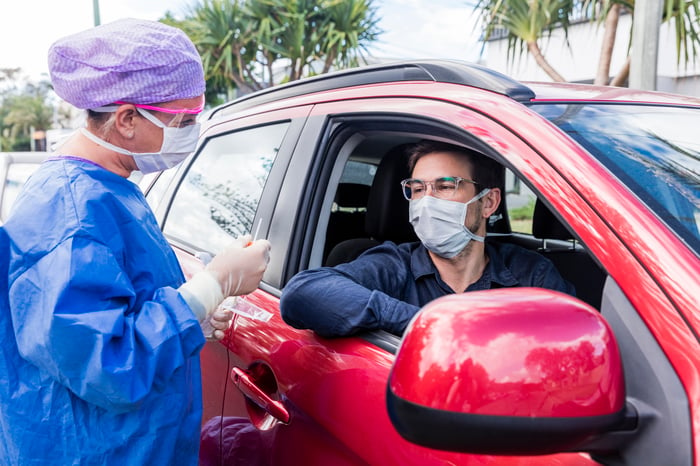 One thing contributing to the Dow’s rally on Thursday was a new strategy from the U.S. Federal Reserve. The Fed will now allow inflation to exceed its longtime goal of 2% in an effort to support the labor market and the economy. This could mean that interest rates will remain historically low for some time, potentially boosting asset prices further.

In other economic news, initial jobless claims were 1.01 million in the week ended Aug. 22, down nearly 100,000 from the previous week. That’s still far higher than pre-pandemic levels, but it indicates that the labor market is slowly recovering.

Investors may have become more optimistic about an economic recovery after Abbott Laboratories received U.S. Food and Drug Administration authorization for an inexpensive COVID-19 antigen test. The BinaxNOW COVID-19 Ag Card test will cost just $5, provide results in 15 minutes, and require no additional equipment. The company plans to ramp up production to 50 million tests a month by the beginning of October.

While Abbott’s test will miss some cases and produce some false positives, making testing cheap and widely available could go a long way toward ending the pandemic in the United States.

Microsoft and Walmart team up for TikTok bid

China’s ByteDance, owner of the wildly popular TikTok social media app, is under pressure from the Trump administration to divest its U.S. operations to quell security and privacy concerns. Microsoft has been in talks with the company for weeks, and Oracle has reportedly already made a $20 billion offer.

CNBC reported on Thursday that TikTok is close to an agreement to sell its U.S., Canadian, Australian, and New Zealand operations, with the buyer still to be determined. Separately, CNBC has confirmed that retailer Walmart is now teaming up with Microsoft on its bid for TikTok.

Walmart said in a statement that a deal could “provide Walmart with an important way for us to reach and serve omnichannel customers as well as grow our third-party marketplace and advertising businesses.” Before joining Microsoft’s bid, Walmart was reportedly working with Softbank on a bid for TikTok.

Late Wednesday, news broke that TikTok CEO Kevin Mayer was leaving the company just a few months after he was appointed. That move could signal that a deal is likely in the coming days.

Walmart is planning to launch its Walmart+ subscription program soon, which will offer same-day delivery of groceries and general merchandise as well as other perks. While it’s unclear whether TikTok would play a role, the retailer could use the platform to connect with users it wants to pluck away from Amazon Prime.

Shares of Walmart were up 5.5% by early Thursday afternoon following the TikTok news, while shares of Microsoft had gained about 3.1%.

A Stock Market Crash May Be Close: 4 Must-Know Metrics That’ll Make You a

It's the three words investors most dread: stock market crash. With the memory of the benchmark S&P 500's (SNPINDEX:^GSPC)...

3 reasons the stock market is poised for a near-term correction, according to

Text size Stocks were rising after China posted blockbuster economic data, spurring optimism about the economic recovery for the...

Review of recent inflation developments in Russia and economic outlook

The Analytical Overview Of The Main Currency Pairs