City of London at the dusk, The United Kingdom of Great Britain and Northern Ireland 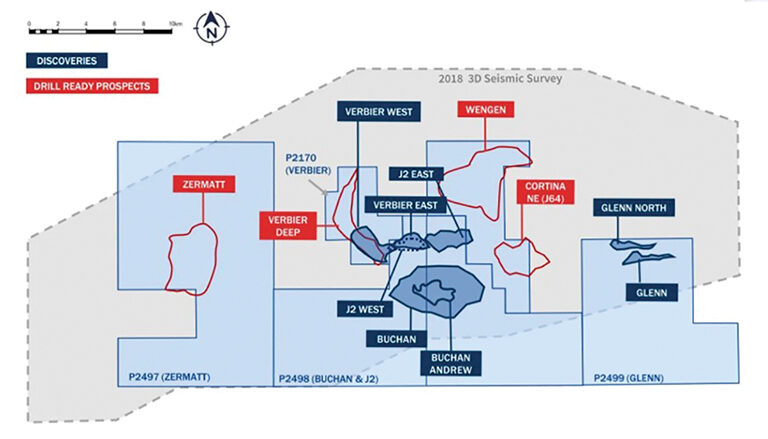 In a new subsurface evaluation, ­Jersey Oil & Gas, a British-independent North Sea-focused upstream oil and gas com­pany, has uncovered a new prospect, named Wengen, to complement its ­Verbier Deep, Cortina NE, and Zermatt drill-ready prospects. The four are estimated to host some 222 million bbl of P50 prospective resources, all in the immediate vicinity of Jersey’s planned GBA production facility.

The new prospect, located in License P2170, is directly west of the Tweedsmuir field and should host some 62 million bbl of potential resources (P50), with the probabilistic range set at 31 million bbl at P90 (higher confidence) and 162 million for P10 (lower confidence). Probability of geological success is 22% for the prospect.

Contractor Rockflow previously estimated the recoverable resources in the GBA at 94.7 million bbl, including the parts within P2170.

In late November, Jersey announced it is taking full ownership of License P2170, which hosts most of the Verbier discovery, as part of the GBA.

In March, Jersey told investors the project is fully funded and that it intends to take the project to potential industry partners via a farm-out process.

An exploratory drilling campaign is being planned for 2022.

Alabama has $1B in unclaimed property; see if any is yours

IT’S TUESDAY! Welcome to Overnight Energy, your source for the day’s energy and environment news. Please send tips and comments...

The Fisherwomen, Chevron and the Leaking Pipe

GBARAMATU, Nigeria — When the tide rose under the rickety wooden house-on-stilts of Onitsha Joseph, a fisherwoman who lives...

When you take your car to the repair shop, you expect to pick it up in better shape, not...

Why Bill Gates is worried about BTC Bitcoin