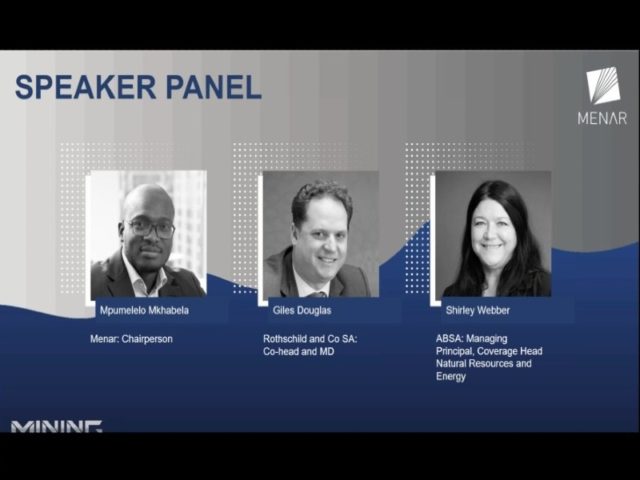 South Africa can successfully exploit its vast mineral resources if it is able to take advantage of current mining megatrends while focusing on collaboration, sustainability and ensuring investor-friendly regulatory policies.

This is the overwhelming consensus of a panel of experts speaking on a Webinar on making sense of South Africa’s mineral wealth. Co-hosted by Menar and Mining Review Africa, the Webinar featured Mpumelelo Mkhabela, Menar chairman; Shirley Webber, managing principal, coverage head: Natural Resources and Energy at Absa CIB; and Giles Douglas, co-head and MD of Rothschild and Co. South Africa.

South Africa holds an estimated R35 trillion worth of mineral resources, which are yet to be exploited. Despite this mineral wealth, the country has in recent years not attracted sufficient investment to allow for new mines to be opened or for substantial exploration campaigns to be carried out.

Speaking on the importance of South Africa’ mineral wealth, Mkhabela pointed to the fact that the 2021 budget tabled by the finance minister last week stipulated that mining was the only sector that grew in revenue by 40% in the financial year. In addition, royalties were up by 21%.

Meanwhile, when it comes to investing in the country’s mining sector, Webber avered that capital will follow sustainability. “Nowadays, ESG is becoming more important and investors, along with banks, are demanding that we approach funding in a more responsible manner,” she said.

At the same time, Webber stated that the key to unlocking funding opportunities is for all stakeholders to continue to collaborate responsibly to stimulate economic growth.

Weighing in on the conversation, Douglas said that while the outlook for the country’s mining sector remains positive for 2021, there are areas of uncertainty that need to be addressed.

“Of course, the first is energy and Eskom’s inability to provide stable and consistent power supply. Also, although good strides have been made with Mining Charter 3, there is still uncertainty around regulatory policy which does not bode well for investor confidence.”

Identifying the megatrends that are influencing the South African mining landscape, Mkhabela explained that the major trend is the move towards decarbonisation around the world and the move towards greener energy. “In addition, the world’s major automakers are looking to develop electric vehicles. As such, there will be a demand for battery metals,” he explained.

Another megatrend that Mkhabela pointed out that can benefit the country is restarting infrastructure development following the COVID-19 pandemic.

He listed developments in India and China as examples where minerals for producing steel will be in great demand and that it is important that South Africa develops its mining sector to produce these minerals so that it can take advantage of the current development supercyle.

Manganese for example is one such mineral and the reason behind Menar’s investment into this sector of industry where it aims to produce 30 000 tpm of manganese from its new mine in the Northern Cape.

The panel were also in consensus that the coal industry outlook remains good and those players operating in this sector will do well for the foreseeable future.

“It is for this reason that Menar is investing heavily into two major coal projects in Mpumalanga, over and above the manganese project. In fact, we are looking to invest R7 billion in new projects by the end of 2022,” Mkhabela highlighted.

In conclusion, Douglas added that while ESG is key to driving investment, there also needs to be a great emphasis on the use of technology throughout the entire mining value chain, from project inception right through to the production stage. Relevant in context of metals that are in demand – battery metals, iron ore and even diamonds.

Despite bond rally, real rates are still negative and that is good for gold –

I’ve been busy this week. I have already dealt with Open Orphan, one of my portfolio holdings, and its plans...

Despite bond rally, real rates are still negative and that is good for gold -

Are Fans in Philadelphia too Hard on their Stars, Players & Teams?

Is the stock market closed on Monday?