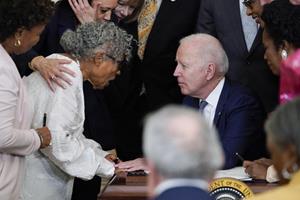 New York, NY, June 21, 2021 (GLOBE NEWSWIRE) — Ms. Opal Lee began her mission in 2016, planning to walk 1,400 miles from Fort Worth, Texas to the steps of congress in Washington D.C in hopes of establishing Juneteenth as a national holiday. On June 17th, Ms. Opal’s dream became a reality. With Ms. Opal by his side, President Joe Biden signed the bill to make Juneteenth a federal holiday in the United States.

Ms. Opal Lee exclaimed: “To have Juneteenth made a National Holiday in my lifetime is unbelievable! I feel Joy, exuberance, and humility. Cinderella could not have had a better time than I did at my White House ball with the President of the United States, the Vice President and all the White House dignitaries! You didn’t find me running away from the ball. It was marvelous, it was stupendous, it was excellent.”

In pursuit of getting Juneteenth legislation passed, Ms. Opal Lee and [INVNT GROUP] partnered to bring petitions to congress and expand Opal’s Walk Live into a national event. The movement also invigorated collaboration with Creative Artists Agency (CAA) and CAA Foundation to bring further awareness to the cause.

Scott Cullather, President & CEO, [INVNT GROUP] said: “Ms. Opal’s vision of equality is one that everyone deserves. We at [INVNT GROUP] are humbled to have played a small part in bringing Ms. Opal’s dream to life, and are honored to be on this journey. We’re thankful for CAA and CAA Foundation; and because of their support, our Senate, Congress, and President Joe Biden for having recognized Juneteenth as a National Federal Holiday – one of the most significant events in our lifetime.”

On Saturday, June 19th, Opal’s Walk for Juneteenth turned into a nationwide celebration, with in-person and virtual walks across Fort Worth, Washington D.C., Los Angeles, and New York City. People were invited to walk ‘virtually’ alongside Ms. Opal Lee by registering to walk the 2.5 miles from wherever they were located. The walks were also powered by Conquer’s efforts to enlist national support for Juneteenth.

Brett Barbee, President of Conquer adds: “Conquer celebrates the fact that our diversity makes us better and our unity keeps us together. Juneteenth as a National Federal Holiday is a tangible reminder of a marathon effort comprised of significant victories that added up to one major win for us all. While her journey wasn’t easy, Ms. Opal’s dream and her personal commitment made it easy for us to fall in love with the effort and the woman leading it. Thank you Ms. Opal. This is just the beginning.”

[INVNT GROUP] will continue it’s partnership while celebrating this historic victory alongside Ms. Opal – past June 19th, through July 4th, and for generations to come.

Ms. Opal is the oldest living board member of the National Juneteenth Observance Foundation (NJOF) that was founded and led by the late Dr. Ronald Myers, Sr., whose initiative is for Juneteenth to become a national holiday. To bring awareness to the cause, she started her Opal’s Walk 2 DC campaign in 2016, where she walked 2.5 miles to symbolize the 2.5 years that it took for slaves in Texas to know that they were free. Ms. Opal launched a petition to make Juneteenth a national holiday on Change.org, and in September 2020 delivered the 1.5 million signatures it had received to Congress. Ms. Opal believes that freedom should be celebrated from the 19th of June to the 4th of July. For more information visit www.opalswalk2dc.com

Is Brembo (BIT:BRE) A Risky Investment?

Recently, Moody’s released a last year’s report on global government debt. Based on this document, the pandemic and its...

UNITED STATES consumer prices jumped more than expected in May, up 5.4% on a year-on-year (y-o-y) basis, the highest...

The latest inflation stats out of the euro area will hit the markets at 09:00 GMT Wednesday. Expectations are...

NYSE:AMC extended its downward slide to close the week as the meme stock fell by 4.66%. Meme stocks took...

RBA Tightening Cycle to Extend into 2024

Last week we released our updated forecasts for the Reserve Bank’s next tightening cycle. We expect that the Bank...

Is Brembo (BIT:BRE) A Risky Investment?