By the Al-Attiyah Foundation

Oil prices fell for a second day on Friday, retreating further from recent highs, as Texas energy companies began preparations to restart oil and gas fields shuttered by freezing weather and power outages. Brent crude futures ended the session down $1.02, or 1.6%, at $62.91 a barrel, while US West Texas Intermediate (WTI) crude fell $1.28, or 2.1%, to settle at $59.24. For the week, Brent gained about 0.5% while WTI fell about 0.7%.

Last week, both benchmarks had climbed to the highest in more than a year. In Texas and the southern states, frigid weather curtailed up to four million bpd of crude production, analysts estimated. Texas refiners halted about a fifth of the nation’s oil processing amid power outages and severe cold. Companies were expected to prepare for production restarts on Friday as electric power and water services slowly resume, sources said. Furthermore, US energy firms this week cut the number of oil rigs operating for the first time since November, according to Baker Hughes data.

On Thursday, the United States said it was ready to talk to Iran about returning to a 2015 agreement that aimed to prevent Tehran from acquiring nuclear weapons. Still, analysts did not expect a near-term reversal of sanctions on Iran that the previous US administration imposed. 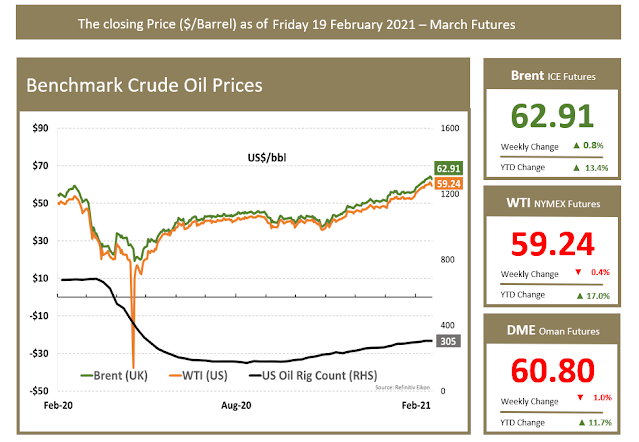 Asian LNG prices slipped las week. Still, the fall was limited by potential supply disruptions from the US, where a deep freeze prompted energy outages in Texas, with natural gas wells and pipelines frozen shut. The average LNG price for April delivery into North-East Asia was estimated at $6.40 per million British thermal units (mmBtu), down about 20 cents from the previous week, sources said. Prices for cargoes delivered in March were estimated at $6.90 per mmBtu, steady from the previous week, they added.

US natural gas futures eased on Friday as forecasts showed weather turning less cold. However, prices registered a fourth consecutive week of gains on concerns over tight supplies after the Arctic freeze disrupted oil and gas facilities. The restart of production as temperatures eased sent prices of oil and natural gas lower. Front-month gas futures fell 1.3 cents, or 0.4%, to settle at $3.07 per million British thermal units (mmBtu). Prices have gained 5.4% for the week.

One trader estimated that about two to three cargoes bound for Asia could be disrupted, though this could not immediately be confirmed. Still, the impact is expected to be minimal as operations resume. According to Kpler, at least one LNG tanker has berthed at Sabine Pass while two more ships have diverted from Corpus Christi towards Sabine Pass. Since Monday, only three LNG cargoes were loaded from US ports for export, ship-tracking data from Refinitiv Eikon and data intelligence firm Kpler showed. The US is the world’s third-largest LNG exporter and typically loads about two cargoes a day, traders said. 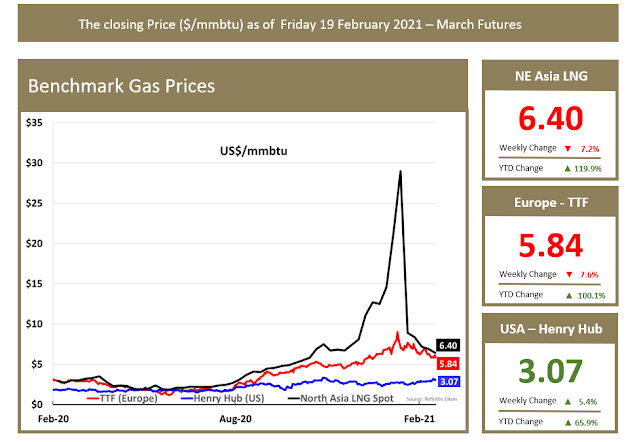 DISCLAIMER: The views expressed in this insight piece are those of the author and do not necessarily reflect the official policy or position of IndraStra Global.

Newark apartment building has been without hot water for more than a week,

Satellite images show a silvery trail originating from a cargo ship that sank off western Sri Lanka in early...

Crude storage tanks that were brimming a year ago when the pandemic grounded flights and kept drivers at home...

What’s ahead for the all-time high stock market?: Morning Brief