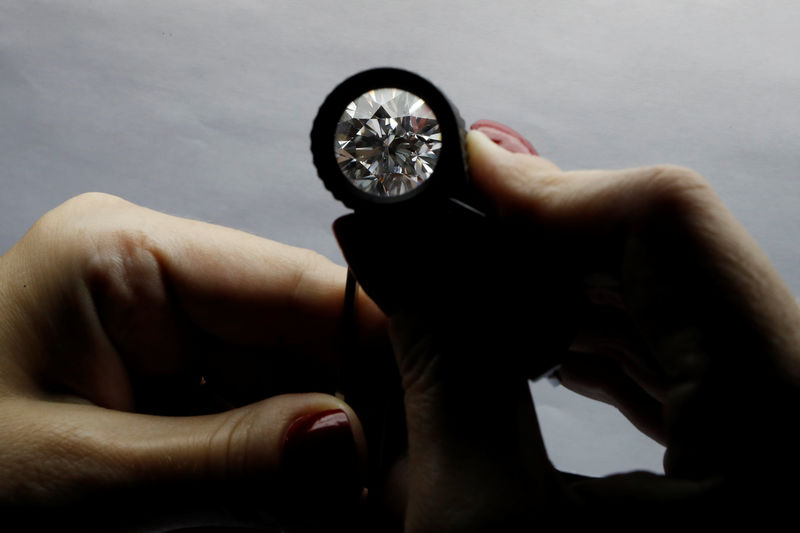 (Bloomberg) — Russian diamond miner Alrosa (MCX:) joined rival De Beers in cutting prices for its gems, but with a twist — the company changed its billing system so buyers can’t tell which stones are discounted, or by how much.

The two biggest producers for months refused to cut prices even as sales collapsed during the coronavirus pandemic, to avoid giving up too much ground before demand returned. De Beers and Alrosa don’t publish prices for their rough stones and their dominance in the often-secretive diamond industry has allowed the two companies to dictate terms to their customers over the years.

In a sign the miners see demand returning, De Beers cut prices by almost 10% for larger stones earlier this week. Alrosa’s buyers also lowered prices in the most recent sale, according to people familiar with the situation. However, instead of the usual individually priced diamond parcels, the company issued a single invoice total for each customer, the people said. Alrosa didn’t explain the change, they said.

Read more: The Masters of the Diamond World Are Losing Control

The two biggest producers have traditionally sought to keep any price cuts private to avoid ripple effects through the supply chain. For example, polished-diamond buyers like jewelry retailers could use the information to seek lower prices from De Beers and Alrosa’s customers.

“We avoided speculative trading during the worst phase of the crisis, keeping ‘price over volume strategy’ intact. We believe it is the only viable strategy to protect the value of the stones in the market conditions our industry faced recently,” said Evgeny Agureev, Alrosa’s head of sales. “As demand for the rough diamonds starts to recover, we make sure that prices under our long-term contracts reflect the actual market trends and a confirmed real demand.”

The decision to cut prices is the latest in a string of concessions to normal sales rules by the two diamond giants during the health crisis. They’ve already allowed customers to renege on contracts and view diamonds in alternative locations. Still, smaller rivals were selling at a 25% discount, eating into the companies’ market share.

An increase in demand for rough diamonds may be inevitable after most big cutters and polishers hardly bought any stones since February and their inventories are running low. However, a sustained recovery of the industry will depend on consumers returning to jewelry stores. While demand has improved in China, the U.S. will be key as it accounts for nearly half of all sales.

Raise your hand if, at some point in your life, you thought matching your entire outfit—from T-shirt to shoes—was...

President Biden has signed into law “Juneteenth” making June 19th a Federal Holiday in the US. This is a...

Family-run jewellers Laings has unveiled its vision for the future, with ambitious new plans to strengthen its presence across...

Dividends Have Bounced Back. Their Recovery Can Continue.

Angola’s diamond sector is on a strong footing