The S&P 500 index rose 2.7% this week to new record highs as the technology, consumer discretionary, and communication services sectors led a broad climb.

The market benchmark ended the week at 4,128.80, up from its closing level of 4,019.87 last Thursday, the last trading day last week due to the market being closed last Friday for the Good Friday holiday. Friday’s closing level marked the S&P 500’s highest close ever. It also set a fresh intraday record Friday at 4,129.48.

The gains came as Federal Open Market Committee minutes released this week from the policy-setting committee’s March 16-17 meeting showed agreement among members that it “would likely be some time until substantial further progress toward the Committee’s maximum-employment and price-stability goals would be realized,” adding that asset purchases “would continue at least at the current pace until then.”

Investor sentiment also improved as JPMorgan (JPM) Chief Executive Jamie Dimon said in a letter to shareholders he sees an economic “Goldilocks moment” ahead and expects an economic boom through 2023 thanks to excess savings, new stimulus savings, deficit spending, and successful COVID-19 vaccines, among other factors.

Progress continued to be made this week in vaccine distributions, although newly reported COVID-19 cases in the US also rose amid spreading variants. Nearly 20% of the total US population has been fully vaccinated so far, while almost 34% have had at least one dose. 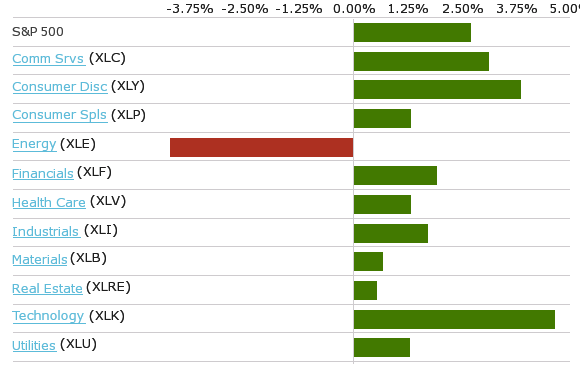 The weekly advance in US stocks was broad, with all but one sector posting weekly gains. The technology sector recorded the largest percentage increase, up 4.7%, following by a 4.2% climb in consumer discretionary and a 3.2% rise in communication services. The lone declining sector was energy, down 4%.

Among consumer discretionary stocks, Norwegian Cruise Line (NCLH) shares climbed 10%. The cruise operator said it plans to resume cruises from the US in July and has asked the US Centers for Disease Control & Prevention to lift the conditional sail order. The company plans to resume cruises outside the US with cruises in Greece in late July.

In communication services, Twitter (TWTR) shares jumped 12%. A Bloomberg News report said Twitter has held deal talks with audio-based social network Clubhouse in recent months. Still, the discussions are no longer ongoing, according to unnamed people familiar with the matter.

On the downside, the energy sector’s drop came as crude oil futures slid. The decliners included Occidental Petroleum (OXY), whose shares fell 10% on the week amid a regulatory filing showing activist investor Carl Icahn sold 7 million shares of the company for $25.60 each, totaling about $180 million.

As for economic data, next week’s calendar features the March consumer price index on Tuesday, March retail sales on Thursday, and March building permits and housing starts, as well as April consumer sentiment on Friday.

Top High Dividend Stocks You Should Consider for Your Portfolio

4 Reasons Jefferies Sees Long and Sustainable Boom in US Housing

The stock market was in a down mood on Monday, although major market benchmarks finished near their best levels...

A one kilo Swiss gold bar and US dollars gold coins are pictured in Paris on February 20, 2020.JOEL...

4 Reasons Jefferies Sees Long and Sustainable Boom in US Housing

Opinion: The days of easy money in the stock market are now over

Global Atomic Strengthens Board of Directors