The bond market settled down on Friday. And that was a good thing for the crybabies on Wall Street that had started to hyperventilate on Thursday, when the Treasury 10-year yield, after rising for months, and accelerating over the past two weeks, had spiked to 1.52%, having tripled since August.

By Thursday, all kinds of complex leveraged trades had been coming apart, and forced selling had set in. By historical standards, and given the inflation pressures now underway, those yields even on Thursday were still astonishingly low. But Wall Street had a cow, for sure.

On Friday, the Treasury 10-year yield dropped 8 basis points, part of the 14-basis-point spike on Thursday, and closed at 1.44%, still higher than where it had been a year ago on February 21, 2020.

Yields rise because bond prices fall, producing a world of hurt – reflected in bond funds focused on long-dated Treasury bonds, such as the iShares 20 Plus Year Treasury Bond ETF [TLT]; its price is down about 16% from early August, after the 3.3% relief-bounce on Friday.

The governors of the Federal Reserve have been speaking in one voice on the rise in Treasury yields: It’s a good sign, a sign of rising inflation expectations and a sign of economic growth. That is the mantra they keep repeating.

Kansas City Fed president Esther George said on Thursday: “Much of this increase likely reflects growing optimism in the strength of the recovery and could be viewed as an encouraging sign of increasing growth expectations.”

St. Louis Fed president James Bullard, one of the most passionate doves, said on Thursday: “With growth prospects improving and inflation expectations rising, the concordant rise in the 10-year Treasury yield is appropriate.” Investors demanding higher yields to offset higher inflation expectations “would be a welcome development.”

They’re all singing from the same page: They’re dovish on QE and low rates. But they’re going to let long-term rates rise, which is starting to tamp down on some of the ridiculous froth in the financial markets and the housing market.

Those Fed pronouncements on Thursday morning in support of higher long-term yields – when the markets were clamoring for the opposite, more QE but focused on long maturities to bring down long-term yields – probably also helped unnerving Wall Street.

But on Friday, the mini-panic settled back down, and that’s good because a real panic could change the Fed’s attitude.

The 30-year yield on Friday dropped by 16 basis points, to 2.17%, erasing the jump of the prior three days. It’s now where it had been on January 23 last year: 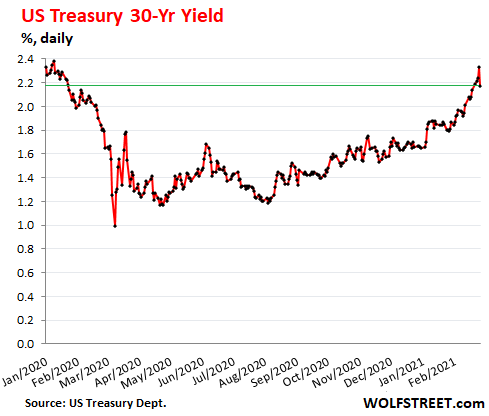 In August 2019, the yield curve by this measure briefly “inverted” when the 10-year yield dropped below the 2-year yield, turning the spread negative. The yield curve has steepened ever since in a very rough-and-tumble manner: 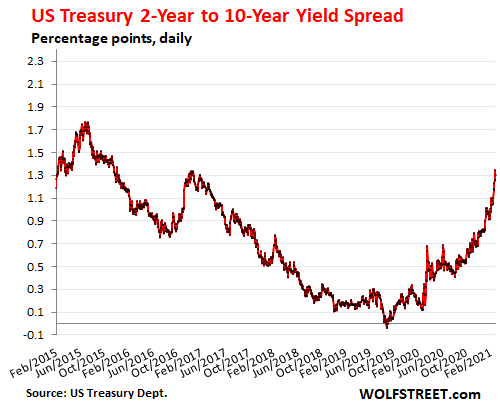 The average 30-year fixed mortgage rate rose to 2.97% during the week ended Wednesday, as reported by Freddie Mac on Thursday. This does not yet include the moves on Thursday and Friday.

But then in early January, mortgage rates started climbing and have now risen by 32 basis points in less than two months — though they remain historically low. 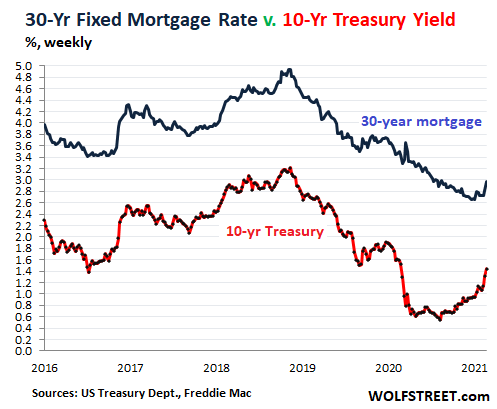 In this incredibly frothy and overpriced bubble housing market, higher mortgage rates are eventually going to cause some…

Asia’s Cryptocurrency Landscape the Most Active, Most Populous Region ‘Has an

A Georgia Ikea store has apologized for its effort to honor Juneteenth with a menu that included dishes associated...

© Reuters. FILE PHOTO: An investor sits in front of a board showing stock information at a brokerage office...