Two Mobile Apps We Are Proud Of

At InstaForex, we always aim at creating products and services with added value, something that stands above – or even runs ahead – of the competition. Easier said than done.

This is exactly why, beside sponsoring top sports clubs and stars, we have always focused on our IT development and content.

The results we have today, as far as the IT and media segment is concerned, prove that we are moving in the right direction.

Particularly, two solutions popular among (our) traders made it to the Top 10 most popular Forex apps in Google Play.

This application has more than 500,000 organic downloads over the 4 years of its existence and is one of the most popular training apps for Forex traders. The application’s audience is rising on a stable and constant basis, and its content is expanding continuously as well both in terms of categories and quality.

The application is available in 7 languages, to be increased to 10 already in 2021. 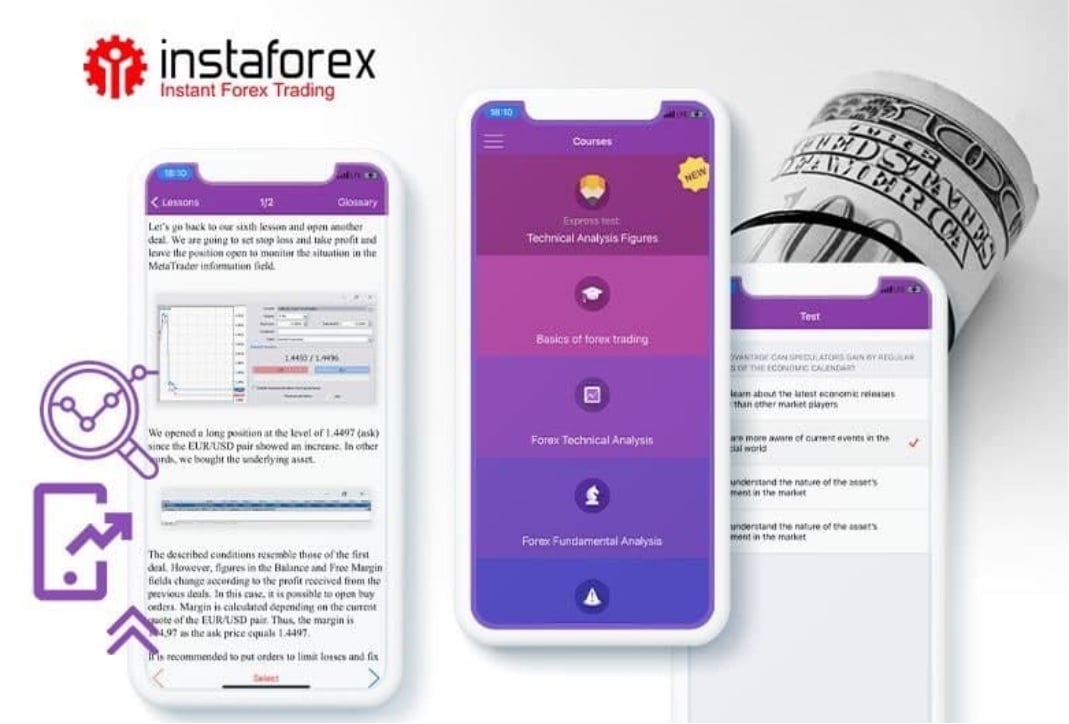 When our clients ask for advice, beside professional market analytics and the corporate InstaForex TV channel, we can proudly suggest that they download the Forex Course app to study Forex on their smartphones at any convenient time.

Another feather in our cap, other than the number of organic downloads of the app (which alone is a testimony to its popularity), is its 4.7 rating, the highest in the Forex segment of Google Play.

All said, Forex Course is not the only product of ours in the Top 10 apps list.

Just like Forex Course, the Forex Portal mobile app is also a product of InstaForex, even though a younger one, having been released only a year and a half ago. Since the early months of its existence, it has stayed in the Top 5 list of Forex apps in Google Play.

What is so special about the Forex Portal and why does it have more than half a million organic downloads in only a year and a half since its release?

The key factor of the growing popularity of the app is its quality content created by a host of analysts, artists, and copywriters – all in all, over 40 people.

That’s right, downloading just one app gives a user access to the best content by more than 40 writers – not to mention scores of translators who convert the analytics on our portal into 12 languages daily.

Beside the mobile app, there’s the FX.CO Internet portal, which we at InstaForex are also proud of. In 2020, the company’s analytical portal, previously residing at MT5.com, was rebranded to turn a new page in its development.

Since its launch in 2009, our portal has provided analytics to traders all over the world for ten years under an agreement with MetaQuotes, the owner of the MT5 brand.

Today, a mature team of professional writers and more than ten years of experience merged under a new resonant name to bring more joy to traders.

The FX.CO portal and its mobile app are among the leaders in financial analytics for currency traders all over the globe.

Quotes, analysis, estimates, signals, indicators, automated patterns, and analytical videos by some fifty writers and anchors – all this is available for free 24/7 in 12 languages to all that seek to enter the world of Forex today.

Forex Course and Forex Portal by InstaForex are just the two most notable, but not the only noteworthy products for novice and experienced traders, as well as for potential partners.

However, the company recommends that you begin your introduction to the company and the Forex market by downloading these two leading apps. This will permanently put at your fingertips a convenient tool to work and study financial markets.

What New Mobile Products Are Planned To Be Released In 2021?

In the next few months, the company plans to launch an updated version of the trading platform that has been downloaded more than a million times as of right now. This will be the most extensive update of the app since its initial release in 2016.

The interface will be completely updated, and usability will be enhanced significantly.

Even if you are not a client of InstaForex, downloading InstaForex Trader App will enable you to efficiently monitor the quotes and, of course, access the best Forex analytics.


Read More: Two Mobile Apps We Are Proud Of

Introduction  Is it damaging your trading account? Do you feel exhausted, irritated, and willing to throw the whole “trading...

Reports Globe has added a new report entitled Global Ligament Prostheses Market which describes a systematic picture of the...

LinkedIn Live – Ask an Expert: Hyperautomation and the Human in the Loop by

Save the date for Episode 2 of a 3-part interactive, Q&A series for business and IT leaders, who need...

BOE Preview: Not Yet Time for Tapering as Virus Resurgence Raises Economic

The BOE would maintain an upbeat tone at this week’s meeting. However, the uncertainty, in particular a third wave...

The mining industry in Angola, no longer a diamond in the rough