The wretched condition of US government finances has already has been noted in earlier articles of this writer and is widely discussed in the literature. The federal debt of $25.6 trillion, the annual budget deficit of $3.4 trillion and the $600 billion trade deficit show that the Administration has lost control of spending. More spending to relieve economic distress caused by the Coronavirus lockdowns is likely soon and is almost certain before the November 2020 elections. This is not sustainable. $30 trillion of federal debt by 2022 is going to undermine faith in the US dollar as a safe haven currency. The federal government lost its AAA rating in 2011.

One of the most obvious signs of US dollar depreciation would be a drop in the US dollar index, which measures the value of the US dollar in relation to a basket of currencies among which the euro has the most weight. Investopedia provides basic information about the index:

Of course the exchange rate with the renminbi is also important: 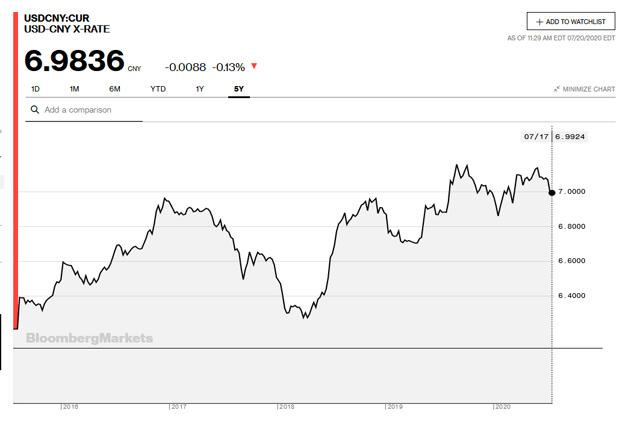 The USD has strengthened against the CNY and is currently trading at about 7 yuan for one dollar. In 2018 a dollar bought only 6.4 yuan. It should be clear that the PBoC does not want the renminbi to appreciate very much against the US dollar since that would mean that Chinese exports to the US and to other countries would become more expensive. One can therefore assume that Beijing would follow a policy of gradual US dollar weakening so as not to endanger its competitive edge thanks to lower prices for its goods.

However, given that the US has been provoking China with an aggressive Hong Kong policy and rights of navigation fleet movements in the South China Sea in addition to support for Taiwan and sanctions against Chinese personalities, the possibility that the PBoC has a plan “B” in case the global advance of the Chinese currency has to be accelerated should be taken into account.

The large amounts of Treasury paper in Chinese possession could be a weapon against the US dollar, but then it would not serve Beijing’s interest to have its dollar bonds lose substantial value due to rapid US dollar depreciation. This writer does not know what strategy the PBoC has worked out, but assuredly there are alternative plans.

So far it does not seem that the new digital currency is linked in some way to physical gold, but that remains to be seen. In any case the digital payment system is already well-established in China, and it will not take long for smart phone users to start using the national digital currency.

It is when China begins demanding payment in yuan for its exports that there will be a significant depreciation of the US dollar as demand for the dollar will lessen due to the demand for yuan for payment. Exactly how the PBoC plans to inaugurate obligatory payment in yuan for Chinese exports is not known at this time.

Investors should keep a close eye on developments of the new Chinese digital currency as it will quickly start competing with Bitcoin and other Cryptocurrencies as the digital yuan becomes widely used internationally. This writer has already noted in earlier articles that the greatest threat to the global dominance of…

Financial market infrastructures (FMIs) include the payment systems that we use every day, as well as more specialised systems...