In an historic move, the Washington State Legislature passed two major pieces of climate change legislation in the closing days of its recent session over the weekend of April 24-25, 2021.

Once signed by Governor Inslee, the Climate Commitment Act creates a market-based, economy-wide, cap-and-trade program. The other legislation (HB 1091) creates a program to reduce the carbon in transportation fuels.1 These bills follow on the heels of the 2019 Clean Energy Transformation Act (CETA), which requires that the electric generating sector be completely decarbonized by 2045.

Together, these three laws place Washington firmly in the top tier of states addressing climate change. They also strengthen the policy alignment along the West Coast by opening the door to linkage with California’s cap-and-trade program and adopting a clean fuels program similar to that of British Columbia, Oregon, and California.

As shown below, Washington State currently emits roughly 100 million metric tons of anthropogenic greenhouse gases (GHGs) annually. Consistent with the Paris Agreement and what the science says is necessary to avoid a global temperature increase greater than 1.5 degrees C, Washington’s legislature in 2020 committed to achieving net-zero GHG emissions by 2050. 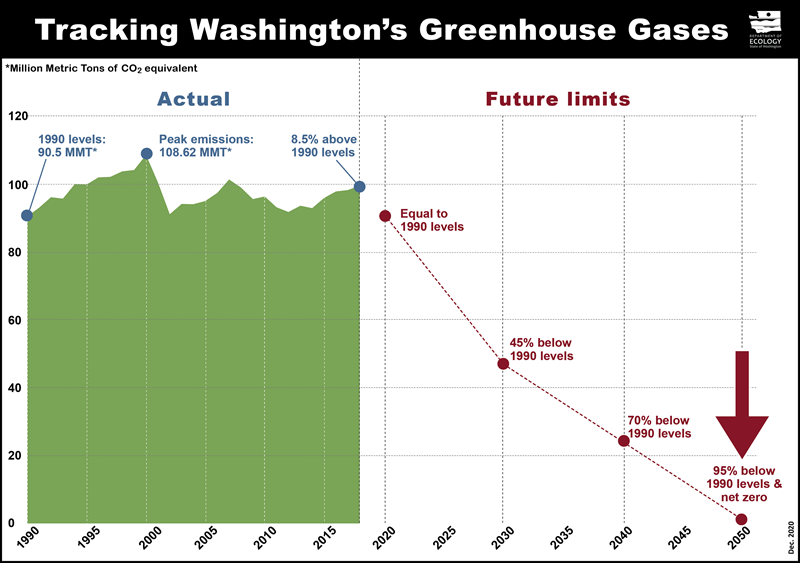 Under the cap-and-trade legislation, the Washington Department of Ecology (Ecology) is first required to impose a cap on GHGs emissions from “covered entities,” those that annually emit more than 25,000 metric tons of carbon dioxide equivalent. Ecology is then required to adopt a budget of allowances to be made available to covered entities for a series of compliance periods, with the first running from January 1, 2023, through the end of 2026.

Allowances authorize the holder to emit up to one metric ton of GHGs per allowance and are tradeable. The allowance budgets will decline over time so as to achieve the emission limits established for 2030, 2040, and 2050.

Allowances are then distributed through auctions, with Ecology establishing a price ceiling to protect covered entities from excessive compliance costs. Auctions are open to both covered entities and other entities without a compliance obligation. The latter are referred to as “general market participants” and must register with Ecology. Presumably to avoid market manipulation, general market participants in the aggregate may not own more than 10 percent of the allowances issued in a calendar year.

Special treatment is given to emission-intensive, trade-exposed (EITE) facilities that might otherwise relocate to jurisdictions that do not regulate GHG emissions. They will receive free allowances in the early years, but the quantity of those allowances will decline over time. Utilities subject to CETA are also provided free allowances to mitigate the cost burden of that program on electricity customers.

Beginning in 2023, the allowance auctions are projected to generate $460 million annually, climbing to about $590 million by 2040. The legislature will determine the use of these funds through future appropriations. The money will be available for an extremely wide range of purposes and activities, including reducing the impacts of GHGs and co-pollutants on overburdened communities, programs to support fossil fuel workers affected by the transition to a clean energy economy, and programs to increase forest and community resilience to wildfires.

Auction proceeds can also be spent on programs to deploy more solar and wind power, and to promote distributed generation, energy storage, demand-side technologies, and other grid modernization projects—as well as on emission reduction efforts in the industrial sector, the agricultural sector, and the built environment. Because the bill requires that auction proceeds be “invested” in such climate-related projects and programs, supporters of the bill chose to brand it as “cap and invest,” notwithstanding that allowances can be traded. The appropriate allocation of this immense stream of funding…

DarkSide, the group responsible for the Colonial Pipeline cyber attack that caused fuel shortages and price increases across the...

Re “All the news that’s fit for wealth” (Social Studies, May 9): A synopsis in last Sunday’s Ideas section...

May 15, 2021 6 min read Opinions expressed by Entrepreneur contributors are their own. How can one person be...

Coke Energy is being discontinued in North America

Coke Energy hit shelves in January 2020, a few months before coronavirus began spreading across the region. However, the...

Two Mobile Apps We Are Proud Of

The 10 Best Grill Pans for Indoor Grilling in 2021