Gold is driving higher against a weakening US Dollar, with XAU/USD extending the 3.59% gain seen in April. A weaker-than-expected US manufacturing PMI report from the Institute for Supply Management (ISM) didn’t hurt gold’s bullish movement. According to the DailyFX Economic Calendar, ISM manufacturing PMI for April crossed the wires at 60.7 versus the consensus expectation of 65, sending the US Dollar lower.

The ISM print casts a certain level of doubt over just how strong the economic recovery in the United States really is. Optimism over a full reopening in the US has grown stronger over the last few weeks as the country’s vaccine rollout impresses even the most pessimistic forecasters. Still, some health experts are concerned over the recent slowdown in daily doses administered and fear that herd immunity in the US may not be a reality.

While that may be true, the US is likely still on its way to a full reopening, and economic strength is expected to continue in the coming months. The Centers for Disease Control (CDC) reports a daily dose rate (7-day average) of 2.3 million, although this figure is down from a peak of around 3.25 million in early April. Comparatively speaking, however, the US is well ahead of most of its peer economies, which bodes well for its economic reopening. In fact, speaking on Monday, John Williams, President and Chief Executive Officer of the New York Federal Reserve stated:

“I mentioned that I expect GDP growth this year to be the fastest in decades. Specifically, I see inflation-adjusted, or real, GDP increasing around seven percent this year. This is welcome progress after the toughest period for the economy in living memory and a winter when the pandemic was particularly severe, and the economy suffered as a result.”

The pressing concern for gold prices may lie with inflation and whether or not the forecasted lift – which is already being seen throughout the economy – will be transitory or lasting. A transitory trend in inflation is in line with current Fed think and would see rates stay lower for longer, which bodes well for gold. Alternatively, lasting inflation could cause rates to rise sooner than expected, and while the Fed would be playing catch up to contain upside price pressure, the implication would likely drag on gold. The NY Fed President also touched on this, subscribing to the former scenario and stating:

“It’s important not to overreact to this volatility in prices resulting from the unique circumstances of the pandemic and instead stay focused on the underlying trends in inflation. My expectation is that once the price reversals and short-run imbalances from the economy reopening have played out, inflation will come back down to about 2 percent next year.”

Gold’s next catalyst likely lies with the April non-farm payrolls report due out this Friday. Analysts are expecting the United States to add nearly 1 million jobs, which would put the two-month streak at nearly 2 million jobs added following last month’s 916k jobs gain. In the interim, a litany of Fed members will speak, with Eric Rosengren, Loretta Mester, Charles Evans, Raphael Bostic and Robert Kaplan on the schedule.

While XAU/USD has made significant progress since shifting higher from the late March swing low – the second bottom of a Double Bottom formation – the yellow metal still has considerable technical obstacles to overcome. A major psychological area and perhaps most-watched level right now is the 1,800 mark. A break higher would likely add some bullish energy to the yellow metal.

Moreover, the falling 100-day Simple Moving Average (SMA) just moved below that level and could add overhead pressure. If gold fails to breach above 1,800, a drop to the 23.6% Fibonacci retracement level from the March to April move may be on the cards. If so, the 20-day SMA (yellow line) could offer an additional layer of support. 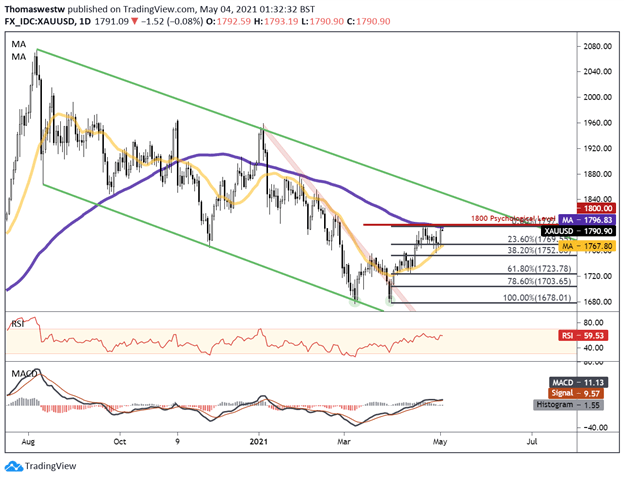 Bitcoin has been portrayed as an alternative to the dollar and other currencies, but there’s no question that it...

This is the fourth installment in our ongoing series of opinion pieces in favor of converting 34th Avenue in...

Redwire Space going public via a SPAC after year of acquisitions

It’s the anniversary of the stock market’s COVID meltdown: Here’s how assets